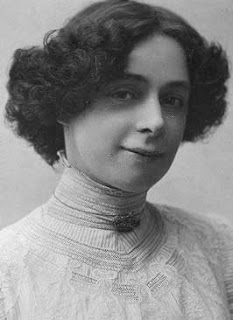 Bess Houdini Was a Time Traveler and now there is proof!
It’s clear from historical records that Bess Houdini had the ability to travel through time. This is the only obvious solution to her documented birthdates changing.
For example, the 1910 US Census shows Bess as 31 years old. That makes the year of her birth 1879. Then fast forward to ten years in the future. The 1920 Census has Bess as 42 years old. So now Bess is born in 1878.
But wait! Her death certificate shows Bess was born Jan 23, 1876. She’s lost three years since we began, clearly a sign of time travel. OH NO, then I find another ship passenger list and her birth year is listed as 1874 (see picture). But after examining the document I see a mistake was made and it should be 1876. 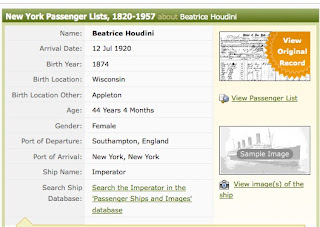 Just when I think it’s over up comes another ship passenger list, this time from 1913 and Harry is listed as 39, which is correct, and Bess as 32 which makes the year of her birth now 1881.
Ok, that’s all…..oh crap, theres more. The 1930 Census shows Bess as 53 years old, which now has her birth year as 1877.
Perhaps these were clerical mistakes. But what about the photographic proof!? Yes, Bess Houdini at the Inauguration of President Reagan in the 1980s!
I think the most damning piece of evidence of all though was from 1969. Not only showing proof that Bess Houdini was still alive (Time Traveler) BUT that we never went to the Moon, it was FAKE!
So we have tracked documents of her being born in 1876, 1877, 1878, 1879, 1881. Ok, ok, maybe we pulled a little 'spirit photograph' trickery with the two photos of Bess. But one thing is for sure...
It's Bess Houdini's Birthday whatever the year!