Who Was Houdini's Boyhood Hero? 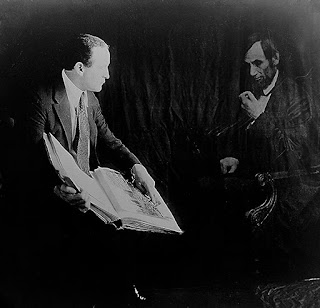 The first thought that comes to mind was Robert Houdin the french magician who Houdini acquired his name from. But actually if that was your guess, you'd be wrong (well you'd also be right, but I'm going after someone else). You might want to say, Dr. Lynn or Harry Kellar or any number of magicians who were performing back then, but his hero was not a magician. Houdini's boyhood hero was none other than the 16th President of the United States, Abraham Lincoln. 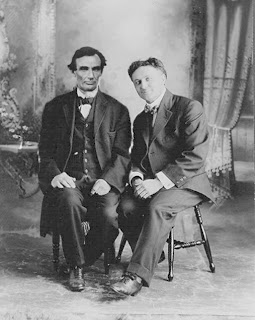 According to the Silverman Biography Houdini referred to Lincoln as "my hero of hereos."Houdini claimed to have read all the books about Lincoln when he was a kid. In the Kalush biography there is a story of young Houdini attending a seance and the medium was relaying a message from Lincoln. Houdini knowing everything there was to know about Lincoln asked a question to Lincoln via the medium and was puzzled when the answer that came back was not correct. This led to his early discovery that most Spiritualists were fake.

Later in life Houdini would collect letters and autographs by Lincoln. He also collected letters by every member of the assassin John Wilkes Booths family. There was a biography written called "The Life and Death of John Wilkes Booth" in which Houdini purchased almost every available copy, few copies remain today. I recently saw a History Channel Show that speculated on John Wilkes Booth not being killed by Union Soldiers but instead having escaped the barn where he had been shot and lived to a ripe old age. IF that is true (which it's still only speculation) I wonder if Booth could have seen Houdini perform!? (probably not)

Houdini also had associations with Abraham Lincoln's son Robert Todd Lincoln. Apparently a medium claimed to have authentic spirit photos of Abraham Lincoln. These photos were actually the creation of William Mumler, the man who is credited with creating the first Spirit Photos.  Houdini sent copies of these to Robert Todd Lincoln and he confirmed that these images were from photos of his father taken at much earlier time period. Houdini often would produce 'fake spirit messages' from Lincoln during his lectures and exposures on spiritualism and even produced his own fake spirit photo with Lincoln. Many spiritualists were claiming that Lincoln was in fact a devote spiritualist and had held seances in the White House. Actually it was Mary Lincoln who actively sought help from mediums to try and contact their dead son Willie. Houdini naturally fought against any idea that Abraham Lincoln was a Spiritualist.


During the promotion of the movie The Master Mystery, it was revealed that Houdini's pet eagle, was named 'Josephus Daniel Abraham Lincoln'. The 'stage name' of the bird was "Miss Liberty" however. Houdini produced the bird at the end of his Whirlwind of Colors routine (the production of scarves and other fabric from a small container). Incidentally, there are photos of The Whirlwind of Colors props in Patrick Culliton's book The Key. I never realized this but the routine that Tony Curtis does early in the HOUDINI movie when he and Bess are onstage doing magic in some small West Virginia Vaudeville theater is a version of the Whirlwind of Colors. Although in the movie they end with the production of a stack of goldfish bowls, Houdini in real life produced the eagle.

This next connection is more a Lincoln and magic connection, and it has to do with a graveyard.  Not far from the graveyard where Houdini is buried, Machpelah Cemetery, is Cypress Hills Cemetery and here you'll find the grave of Signor Blitz, also a magician. Blitz is said to have performed at a function where Lincoln and his son Tad were present. There is a famous exchange between the two men. Lincoln asks Blitz how many children he has made happy. Blitz replies that it must be thousands. President Lincoln follows that with “I fear that I have made thousands and tens of thousands unhappy.” This exchange took place as the Battle of Gettysburg raged.  Of course, Houdini was keenly aware of the connection between Blitz and Lincoln. 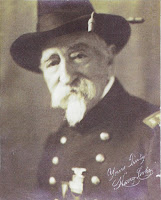 The last interesting piece of history was discovered by Mark Cannon the escape artist and escape historian. He is currently writing a book on the life of Harry Cooke. It is possible that Cooke was the first escape artist in America. Cooke also worked directly for Abraham Lincoln as a Spy for the Union Army. Harry Cooke had shown Lincoln an escape from a piece of rope and Lincoln was so impressed he put him to work.  It just so happens that Harry Cooke (Horatio Green Cooke) and Houdini knew each other and Cooke's daughter told Mark Cannon that her father was a mentor of sorts to Houdini! There is more to the Cooke/Lincoln story, and you can read that here: https://www.themagicdetective.com/2017/04/the-magician-who-met-abraham-lincoln.html


UPDATE: This article originally appeared on my blog Dec 30, 2010. It had a slight error in the information, and I corrected that. I also discovered if you type in 'Houdini Lincoln' in a Google search you end up at this site...http://weeklyview.net/2017/06/15/harry-houdini-and-abraham-lincoln/.  The author should have given me credit as it appears the bulk of his article came right out of my blog, including an error that I fixed and a section I removed on a letter by Houdini concerning Lincoln Letters.