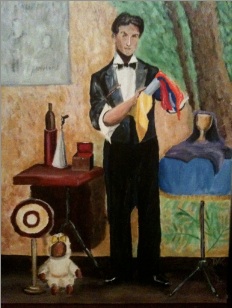 This painting is a recreation of a photograph of a very young Harry Houdini. It captures a moment in time before fame, before he really became the Houdini we know about today. The photo that I worked from was faded and kind of blurry so I chose to leave off a number of things from the table on the left. After I completed the painting I found another copy of the photograph which shows more detail. One of the things that could be seen was a pair of Bean Giant handcuffs. The poster in the background is for his SubTrunk routine that he called "Metamorphosis". In the photo the poster is out of focus, so I did the same thing with the painting.
Posted by Carnegie