An Interesting Night of Escape 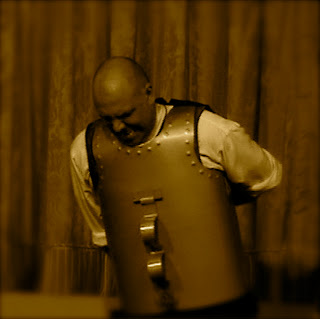 In 2008, I had the pleasure of working at the National Theatre in Washington D.C. I was doing my show the Monday before Halloween. I had been chosen because I present escapes as well as magic, so sure enough I included a number of escapes in the show. The first was a very straight forward escape from a set of Thumb Screws. Later in the show my assistant did an escape from a carefully inspected cloth sack.

But the closer of the show, this was going to ramp up the drama. I decided to finish with the Steel Straight Jacket Escape with the addition of a plexiglass box being locked over my head. I planned on it being dramatic. I also planned on trying out something different for the first show.

Back in Houdini's day he would often draw out an escape to very long lengths of time. The philosophy today is that this approach would NEVER work. No one would sit for a long period of time while someone tried to do an escape. Time to test that belief. So in my struggle to escape from the Steel Straight Jacket, I seemed clearly in trouble. I did get the plexiglass box off with relative ease, but could hardly budge on the jacket. The music ran out, but I still struggled. I was able to get the jacket up somewhat and had my assistant and time keeper hold the jacket while I shimmied out of it. The audience was stunned and very enthusiastic in their applause. I was drenched in sweat, my shirt was torn because it got caught on part of the metal on the Steel Straight Jacket. It was surreal.

Second show. I repeated the Steel Straight Jacket Escape as the finale, but this time, I took a more direct approach to the escape, finishing slightly before the music ended. It was shorter, faster even. The organizers after the show asked if I would agree to a Q&A with the audience which I agreed to. The ONLY question, "The two presentations were so different, what was the reason?". The people who saw both shows said they enjoyed both versions of the ending, but were astonished at how the same effect could play so differently. Frankly, the reality is that with any escape something can go wrong and every escape is typically different unless it's all rigged. Nothing was rigged about the SSJ Escape. But I did have trouble getting the locks open on the plexiglass box during the first show. I also broke the pick during the first show. These 'accidents' actually stretched the presentation even longer than I had originally planned. Did it matter? Actually it showed me that if an audience likes you, they will sit still during a dramatic escape. I don't think they'll sit an HOUR like some of Houdini's escapes, but they will hold on longer than one might realize. Then again, maybe they would sit an hour...hmmmmm
Posted by Carnegie