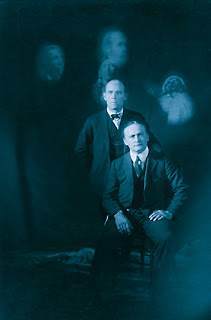 I'm going to relate an incident that happened to me about 15 years ago. I could be wrong about the time, but it was surely more than 10 years ago. I'm not sure it's a true ghost story perse, but it's clearly an odd occurance.

I had come home from work and was carrying a magazine with me that had Bess Houdini on the cover. I tossed the magazine on my bed, along with my coat and went into another room. When I walked back into my room, there was the magazine that I had tossed onto the bed, sitting completely upright on edge! I couldn't quite believe what I was seeing. As I stared at it I noticed my shadow in the corner of the room, except it wasn't my shadow. It was the shadow of a man with a hat. I turned around to see if there was someone behind me. There was no one there. When I turned back around the shadow on the wall moved and was gone. I thought it was weird and kinda cool to be honest, so I tried to duplicate it, but I couldn't find the place to stand that would make the wall shadow. In fact, my shadow was in a totally different place than the shadow I saw.

What was it? I have no idea. Was it a ghost? I don't really know, probably not,  but it sure was weird and as I said, kinda cool in a way. Oh, and I tried to get the magazine to stand up on edge after that and it wouldn't stay.  It happened around Halloween and imaginations do tend to run wild around that time of year, but I still remember it as if it just happened.
Posted by Carnegie