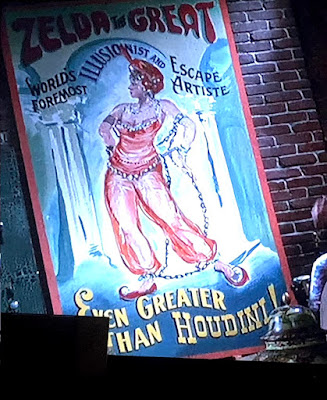 I watched Batman with Adam West growing up. Now everyone refers to it as Batman66, because it came out in 1966. I saw every episode there ever was, but I saw them as a kid. Imagine my surprise to come upon THIS episode called, "Zelda the Great". It starred Anne Baxter as Zelda the Great. She was a criminal, but also an illusionist and escape artist. Hanging in her secret warehouse was this huge poster (see above) which reads at the bottom, "EVEN GREATER THAN HOUDINI".

Houdini is mentioned in the episode as well. And this interesting line is said, "and you know Batman, he's the greatest escape artist alive!"  Pretty cool stuff. Below is the contraption that is built as Zelda's new show piece. Except there is one problem. Neither Zelda nor the builder know how to open the device. So they set a trap for Batman and Robin.  They trap Batman and Robin and then watch closely on how Batman escapes. That will then reveal to Zelda HOW to escape!!!! Holy Houdini Batman! 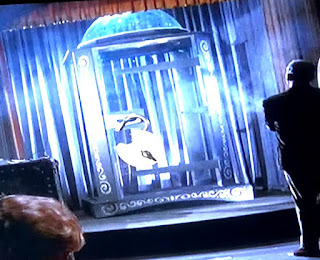 Email ThisBlogThis!Share to TwitterShare to FacebookShare to Pinterest
Labels: Batman