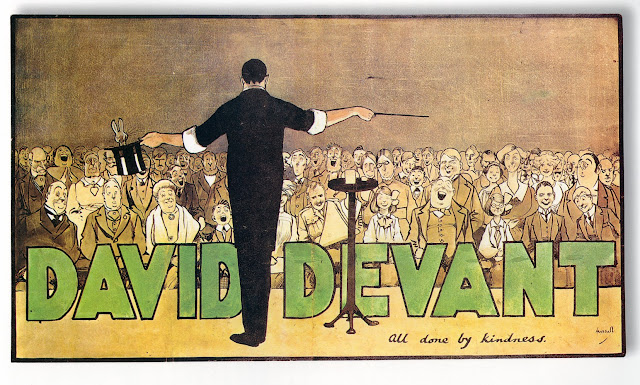 David Devant was born 150 years ago Feb 22, 1868. He was known as England's Greatest Magician. For some reason, his name is not as well known in the United States. I think a certain segment of magicians know him, mostly the illusionists, and magic historians. But other branches of the art aren't  so familiar with his name.

I first became familiar with the name by seeing his magic posters. The one at the top of the page is probably the most iconic Devant poster. And does this poster ever speak volumes.  In a single poster, the artist has captured, people of all ages laughing. There are children in the image, women, men of all shapes and sizes, even a wounded soldier is depicted. I should point out, there are a couple people in the audience with a scowl on their face, that's pretty typical too. And Devant's catchphrase, "All Done By Kindness." Wow, does that speak volumes. Today, in our super cynical society, kindness seems to be a thing of the past. But Devant clearly had command of this group of people.

David Devant was born in 1868, as David Wighton in Holloway, London. He became interested in magic as a boy after seeing a traveling magician.  It's said that his choice of the name 'Devant' came about during a visit to an art gallery with his father. There was a painting with the title "David devants Goliath. Right then and there he chose that name, Devant. Devant was a triple threat,  he was an inventor of illusions, a performer of magic, and one of the early demonstrators of film. In the invention department, there are many. For example, The Artists Dream Illusion(1893), The Inexhaustible TeaKettle, Biff-The Vanishing Motorcycle(1913), The Golliwog Ball, and his crowning achievement, The Mascot Moth(1905). In regards to The Golliwog Ball, this was his interpretation of Harry Kellar's Demon Globe trick. Kellar's version was very complicated and difficult to perform. Devant worked out a deal with Kellar that if he could find a simpler method, he would share it with Kellar on the grounds he had Kellar's blessing to perform it. Needless to say, the Devant method was far easier and far more mystifying. I wonder if Teller's Red Ball illusion is his version of the Devant trick? 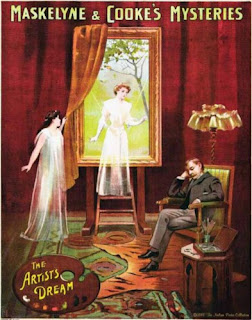 In the performing department, well he was already a successful entertainer by the time he partnered with J.N. Maskelyene. It doesn't hurt having your own magic theatre to present magic and in Devant's case, magic plays. The Artist's Dream is an perfect example. I can't recall where I first heard or read about The Artist's Dream, but it captivated my attention from the start. I've seen several modern day recreations of the illusion, some are quite good, some are not. In the effect, the magician plays the part of a painter. He has just painted his recently deceased wife on canvas. He covers the magic in order to step down and nap. As he sleeps, the image comes to life and steps from from the canvas.

I mentioned that Devant was an early demonstrator of films. David Devant was in the audience when the Lumiere Brothers first presented the Cinematograph in London. Being a showman, he instantly recognized the value of this new medium and wanted to get onboard. He was unable to acquire a Cinemtagraph, but soon was able to get a film projector from another gentleman. Immediately thereafter,  David Devant was showing movies to his LIVE audiences. Other magicians would follow suit and show films, but Devant was the first magician in England to do so. Devant also is captured a couple times on film. Below is an example of Devant performing actual magic and then camera tricks....(wow, even back then they used camera tricks)

Devant was a prolific author and on occasion co-author. For example, he cowrote the excellent book, OUR MAGIC with Nevil Maskelyne. On his own he wrote: Lessons in Conjuring, The Woes of a Wizard, Secrets of My Magic, My Magic Life, Magic Made Easy, and more. Apparently, The Secrets of My Magic, got Devant expelled from The Magic Circle for exposing methods. Kind of ironic, considering Devant had been the very first president of The Magic Castle. He was actually expelled twice for exposing methods.

In 1919, at the height of his career, David Devant received some dreadful news. He had acquired some sort of debilitating disease that forced him to be institutionalized for the remainder of his life. What a tragic ending to a gifted and talented individual. He passed away October 13th, 1941 at the age of 73. 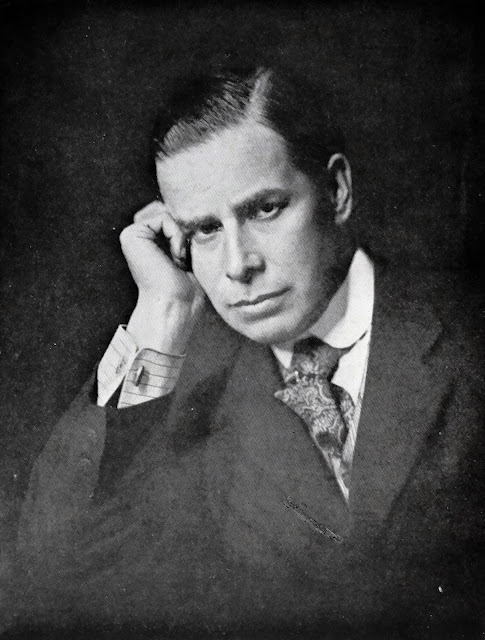