The Man Who Fooled The Best Minds In Magic 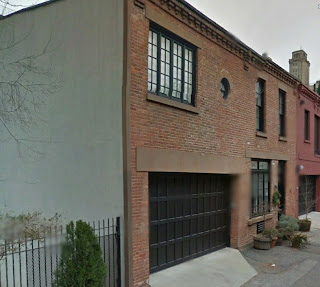 It all began in this carriage house in NYC. An amateur magician fooled the best minds in magic. The performances were held on the second floor right near the windows on the left. A small stage was erected and there were chairs available for twenty people. The performances were invitation only. Those who attended were a virtual who's who in the world of magic. They all walked away puzzled and amazed.

The man who put on these shows was Dr. Samuel Cox Hooker and his show was legendary. Years ago, I remember reading through a copy of GREATER MAGIC and coming upon a description of his show and wondering what all the fuss was about. Then in 1993 the Los Angeles Conference on Magic History recreated the show using the original apparatus. In 2007, the conference brought the show back for a repeat performance. I spoke to a few people who attended and the word I heard the most was "I have no idea". Obviously, whatever Dr. Hooker had created was a timeless mystery just as remarkable today as it was nearly 100 years ago.

Both Genii and MAGIC Magazine did extensive articles on Hooker and I've pulled some of my information from those sources as well as a few other places. This great mystery that Dr. Hooker created was not a single trick nor was it a single method. It was numerous puzzle pieces that came together to create what has been called 'The Hooker Rising Cards'. But Dr. Hooker preferred to call his show 'Impossibilities'.

The show first began in 1915 in the carriage house behind his home on Remsen St. in Brooklyn. I believe the initial show was just a demonstration of his Rising Cards. But Dr. Hooker's Rising Cards were unlike anything anyone had ever seen. The show would begin by handing out a houlette for examination. A houlette is a small holder for playing cards, and according to the book Greater Magic, the Hooker houlette was made of glass. Next, a new pack of cards was borrowed from a member of the audience. The cards were shuffled and then placed into the houlette. Then, any card called for would rise out from the pack! But that was just the beginning. Next, cards were selected, signed and put back in the pack and it then put back into the houlette. The selected signed cards would rise. The houlette was moved to different part of the table to disprove any connection to the table. In fact, the houlette could be handed out for examination again and again. Finally, a large glass dome was placed over the houlette and the cards not only rose up like before, but now they floated higher and higher within the glass enclosure. Eventually, all the cards flew from the houlette and that was the conclusion of the original show.

Harry Kellar was witness to the show in 1914 when it was in it's early stages. It was clear to Kellar even then that this was a remarkable feat. Kellar would attend again a couple years later and by this time Dr. Hooker had added another feature, a bear head he called
Militiades III. When the show began the Doctor would speak to the bear and it's eyes would open and it's head would move. He could ask the bear questions and the mouth would move in response. According to an article in the San Diego Union from May 26, 1918, the magicians in the audience seemed fairly unfazed with those antics. But then the bear head levitated in the air and moved about. Dr. Hooker passed his hands around the floating bear head and then passed a hoop around it. All the while the bear head, which he called Militiades after an Athenian chieftan, continued it's facial animations. The newspaper article said the magicians were completely dumbfounded by this. The name Militiades, according to the article by Jim Steinmeyer in Genii Magazine April 2008, was inspired by the Athenian General and a children's book from Hooker's youth called 'The Adventures of Militiades Peterkin Paul'. So his bear head became Militiades III.

When Kellar saw the performance he related to Dr. Hooker just how amazed he was and that he had no idea how the mystery was accomplished. Dr. Hooker then invited Kellar to peer behind the curtain, so to speak, and revealed the workings of this marvel. Kellar was so taken with the wonderful illusion that he eventually asked Dr. Hooker if he could have it for his own home. According to the book, Kellars Wonders by Mike Caveney and Bill Miesel, Dr. Hooker agreed to allow Kellar to build the illusion for demonstrations at his home but swore him to complete secrecy.  There was a catch however. Hooker would not build the effect for Kellar. He told Kellar that he would have to create it on his own and not use a magic builder in the process. This meant that Harry Kellar had to go off his memory of what he saw and experiment with various things in order to build it for himself. He did begin work on it and hired another mechanic to help, but never completed the work.

Magician's who saw Hooker's incredible miracle included: Harry Kellar, Houdini, Charles Carter, Adelaide Herrmann, W. J. Hilliar,  Dr. James Elliott, Guy Jarrett, Theo Bamberg and many others. In 1929, Dr. Hooker decided to revive the show but felt he was too old at this point to perform. So he taught the routine to John Mullholland and Dr. Shirley Quimby who presented it for another round of performances. According to Ted Annemann in the Jinx #87, 1938, the effect was bequeathed to Mullholland and Quimby. Annemann quotes The Sphinx of Sept 1936, "for performance from time to time as opportunities occur." However, I don't think the apparatus for the illusion was actually given to Mullholland, rather the opportunity to present the effect. It doesn't appear that Mullholland ever presented the effect after the run in 1929.  The apparatus for the Hooker Rising Card Illusion remained in the Hooker family and eventually with Hooker's grandson who sold it to John Gaughan.

The Hooker Rising Card was presented at two different Los Angeles Conference on Magic History. John Gaughan restored the original apparatus and together with Jim Steinmeyer, they did their best to recreate a routine based on Hooker's work. The original routine as presented by Dr. Hooker was somewhere between an hour and 90 minutes. The version presented at the magic history conference was twenty minutes. But according to all accounts, the magic of Dr. Samuel Hooker continued to bewilder the best minds in magic of today just as it had done during magic's Golden Age.

One additional note that I found interesting. It turns out that Dr. Hooker, who was a chemist by trade, and a very dedicated amatuer magician, is related to a modern day magician, Paul Romhany.