Houdini in D.C. 97 Years Ago Today 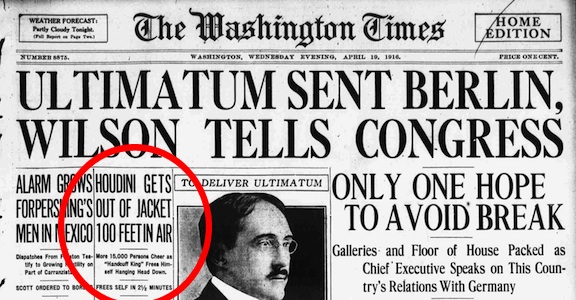 Harry Houdini was in the Nation's Capital, Washington D.C. on April 19th, 1916 and he had a busy day scheduled. He was going to present what I think was his FIRST hanging straight jacket escape in Washington that day. There was an enormous crowd that had gathered to watch Houdini attempt the impossible. The Washington Times newspaper said that there were more than 15,000 spectators who came out to watch Houdini. The paper also said "Persons who saw the great throng from windows of nearby buildings said it was the biggest crowd ever assembled in Washington at one place except for the inauguration of a President."

Houdini was appearing at the Keith's Vaudeville Theatre on 15th, which was about a block from where the straight jacket escape would take place. This particular escape is not the one captured in the famous photo of Houdini hanging upside down in front of the Treasury Building. In fact, that escape took place in 1922. The first hanging straight jacket escape by Houdini in Washington D.C. took place in front of the Munsey Building. It was also known as the Times Building and today is known as the Marriott Building. It is located right next to the National Theatre at the corner of Pennsylvania Avenue and 14th Street. I am assuming Houdini hung on the side facing Pennsylvania Avenue because he would be seen by more spectators from that side. Due to the fact it was the Times Building probably explains the front page coverage of his escape in the Washington Times Newspaper.

The paper says that a derrick was erected and hung out of a 5th floor window. Ropes and pulleys were attached to this which would later raise Houdini from the ground. The straight jacket he was placed in seems to be different from the standard. The paper says "Houdini was strapped into this jacket with his arms bound to his sides with heavy leather bands and buckles. His hands were in front of him and all of the buckles were in the back where he could not possibly reach them." It sounds like a slightly different kind of jacket because of the leather bands that held Houdini's arms to his sides. But it could have just been a normal leather straight jacket and this was how the reporter perceived it.

Houdini was raised between 75-100 ft in the air and freed himself in 2.5 minutes.

Houdini gives an interview to the newspaper before the escape and has this to say, "I've about reached my limit, it seems to me. For the last thirty years, or thereabouts, I've been getting out of all sorts of things human ingenuity has devised to confine a human being. Up to date there hasn't been anything made that confined my activities to any alarming extent. But some day some chap is going to make one. And I'm going to quit with a clean record before he comes along. I've about made up my mind that this is the last stunt I'll perform. Hereafter, I intend to work entirely with my brain. See these gray hairs? They mean something. I'm not as young as I was. I've had to work hard to keep ahead of the procession. I'll still be entertaining the public for many years to come. But I intend to do it along lines not quite so spectacular. As an escapist extraordinary I feel that I'm about through."

Houdini said that in 1916 and he would have been 42 years old. But apparently, he did not retire from escapes as he continued to do them for another 10 years, until his untimely death.

*The photo is not from the 1916 D.C. Straight Jacket Escape. I did find a photo that 'might' have been from that escape because of the configuration of the jacket, but I don't know who owns it so I just skipped by it.

Also, the above link on the Munsey Building will take you to an article I wrote about Houdini's D.C. Challenges and there is a photo of the building as it looked around the time of Houdini.
Posted by Carnegie