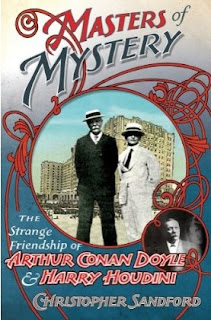 The book is called Masters of Mystery: The Strange Friendship of Arthur Conan Doyle and Harry Houdini and it's set for release from Palgrave Macmillan on Tuesday, November 22. This is the same book that was released in the UK in October. The book is written by Christopher Sanford, who in the past has penned biographies on Kurt Cobain, Steve McQueen, Eric Clapton, Mick Jagger, David Bowie, Paul McCartney, Keith Richards, Bruce Springsteen and Roman Polanski.

According to John Cox over at WildaboutHoudini.com Christopher Sandford will be signing copies of his new book, Masters of Mystery: The Strange Friendship of Arthur Conan Doyle and Harry Houdini, at Books Inc. in Berkeley, California, on Monday, December 5, 2011 at 7:00pm. So if you are in the area, you'll want to go by and get your book signed by the author!

You can pre-order the book right now on Amazon.com. It's available in hardcover and a Kindle edition.  By the way, the UK version of the book has a slightly different title and cover. See below. 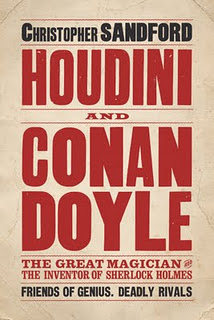 I wrote a very short blog on the hotel where Conan Doyle and Houdini had their final seance, you can see that here: http://deancarnegie.blogspot.com/2010/11/1922-atlantic-city.html
Posted by Carnegie