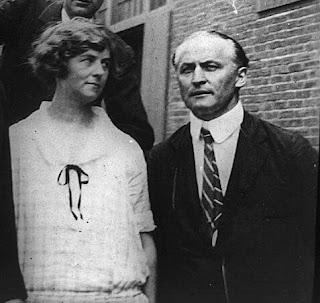 Yes, believe it or not, Margery the Medium did outdo Houdini, but not in the way you might be thinking. Houdini died on Halloween Oct 31, 1926 at the age of 52. It turns out that Margery lived to be one year and one day longer in age. Let me explain. She died on November 1st, 1941, she was 53. So that makes her one year older than Houdini was when he died and she stayed around one extra day, dying on the day after Halloween ( I'm taking a bit of artistic license with the math)

Margery is an interesting character. I'm still waiting on the book Witch of Lime Street, that John Cox first let us all know about.  There is something terribly fishy going on between her and Houdini, in my opinion and I'd like to find out more.

Now if you'd like to hear about Margery from the side of the Spiritualists, below are two videos of Leonard Spicer, a Canadian Medium who is lecturing on Margery. Houdini-files will recognize the errors in statements, though there aren't many. I'm not agreeing with this fellow, I just thought you might enjoy hearing what the other side says about Margery.

To read more about Margery, take a look at my previous blogs:
Margery and the Bell Box(s)
Houdini Didn't End Margery's Career
Margery-medium-Cemetery
Posted by Carnegie