Early Retirement
In my last blog I shared with you the reason Robert Heller was forced into retirement. He had been swindled out a $1,100.00. Creditors were after him.  He's forced into retirement in Washington D.C. and drops his stage name and now goes by his real name William Henry Palmer.  The first place he lives in Washington is 260 F. Street NW. which is today a parking lot that is at the corner of 3rd and F st. St. (see photo)
The next place that William Henry Palmer lives in D.C. is 447 13th Street NW. Today the Warner Theatre sits at this location. The Warner however was not built until 1924 and was then called the Earle Theatre. The houses or apartments that were at this location were likely torn down to make way for the theatre. An interesting fact about 447 13th St. NW is that it is walking distance from the National Theatre that Heller would later play when he returned to magic.

In the DC Registry he is listed as a Professor of Music. This is the same way he listed himself on the ship manifest when he traveled from England to America the first time. He is also known to have been the organist at a large church in D.C.. I tried to track down the information on the church, but there is nothing in any records I can find.  My first best guess was St. Johns Church on H. St. NW, which would have been an easy walk from where he lived. I discounted a second church, the Church of the Epiphany as being too small. But I just received a newspaper clipping that shows Heller doing a concert at the Church of the Epiphany in 1864. Granted this is after he went back to magic, but it changes my opinion now that this is more likely the church he played organ for.


MUSIC
This will not be the easiest thing for me to write about as I do not know music, but I found a few things of interest pertaining to Heller. Prior to his 'retirement' in D.C. he performed in Boston. The very first North American performance of 'BEETHOVEN: Concerto No. 4 in G major for Piano and Orchestra, Opus 58' was given on February 4, 1854, at the Boston Odeon by Robert Heller with Carl Bergmann conducting the Germania Musical Society. This has historical significance for the music field as I found it listed on the San Francisco Symphony's website. It is also noted in a book "Annals of Music in America" by Henry Charles Lahee. 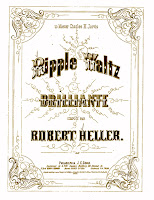 There is no doubt William Henry Palmer could have had an incredible career as a pianist. His abilities were astounding. Not only could he play perfectly both the piano and the organ, but he had the skill to use mimicry in his performance. An example was when he would demonstrate "The Piano Lesson" and would assume the role of a young child first learning to play the piano. By all accounts the presentation was hilarious.
He also wrote music. The Library of Congress in Washington has several of his musical pieces on file, including; The Ripple Waltz (1854), Wayside Flowers (1854), and The Presidents Mounted Guard Quick Step (1855). He began publishing his music while he was living in Washington D.C.. As a 'Professor of Music' it no doubt gave him credibility to be a published musician. Though his musical prowess was enough to stand on it's own. 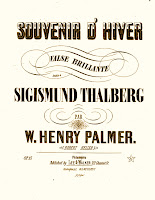 He published music under the William Henry Palmer name as well. Notice the sheet music for Souvenir d'Hiver valse Brillante (1857). In English this is the 'Souvenir of Winter', and underneath the name W. Henry Palmer in small letters is {Robert Heller}. This is also dedicated to Sigismund Thalberg, who was the pianist to the Court of Austria. Heller was a pupil of Thalberg's in his youth in England.

In 1932 a book was published which was part biography and partly music book which included sheet music of all of Robert Heller's works. The book was called "Melody Magic".

A rare treat, a  sample of Heller's music.

MUSIC LEADS TO MARRIAGE
Adolf Travers Kiechkoefer was a partner of George Riggs. Maybe you've heard of Riggs Bank, well he's THAT George Riggs. Mr. Kieckhoefer was also a violinist and a lover of fine music. He would often hold parties for gifted musicians that were in town. Rarely however did he find gifted musicians among those already in Washington. Imagine his surprise when an invitation to William Henry Palmer turned out to be an incredible performance and a wonderful evening. The two became friends and Palmer/Heller visited the Kieckhoefer home often. Apparently he was popular with the five Kieckhoefer siblings as well. He began courting the youngest daughter, Anna Marie, and he married her in September of 1857. This information is from an interview with Mary Adelaide Palmer who was their daughter.

William Henry continued to teach music and play the organ at his church for about ten years.  The Palmers had three children while they lived in Washington D.C., Mary Adelaide Palmer, Annie Palmer and Joseph Henry Palmer. Apparently the urge for William Henry Palmer to once again become HELLER was still there. In other words, the desire to do magic for a living was getting the best of him. It was a fire that burned inside him and there was nothing he could do to quench the fire but to submit to it. This caused a temporary rift between him and Mr. Kieckhoefer who could not understand why W.H. Palmer would want to leave his promising music career.

RETURN TO MAGIC
Sometime in the 1861's Palmer becomes HELLER again and returns to magic. It is likely that he did this gradually. Success was slow coming however. Then an event occurs that changes the path of his life and career. He meets Edward P. Hingston who is the manager for Artemus Ward and other acts. For the record, Artemus Ward was a humorist and humor writer but is also considered the very first stand-up comic. Ward was Abraham Lincoln's favorite writer and it is said Ward also inspired Mark Twain. E.P. Hingston convinces Heller to basically 'lighten up' his act and he may have also been the one to encourage him to add his music to the show. Prior to his return to magic he only performed conjuring feats in his performances. Now, he is doing a three part show which he refers to as Magic, Music and Mirth.

Heller opens at 585 Broadway in 1864 in a show called "Sallie Diabolpue". He uses a clever advertising slogan, no doubt created by Hingston.

Shakespeare wrote well,
Dickens wrote Weller;
Anderson was -------
But the greatest is HELLER
Another interesting advertising gimmick that was used was to send flyers to all the churches in town that read "Go To HELLers". The clergyman in town wondered what was going on and many went to the show. Most were delighted by what they saw and encouraged their congregations to check out Heller's entertainment. 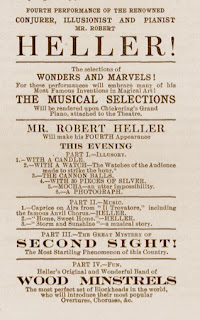 This show is a huge hit. Newspapers of the time singled out his music as being fantastic but even that did not overshadow his 'Second Sight' routine which was overwhelming everyone. After a year he finishes in New York and takes his show to Boston and a tour through the states. Next he goes to Paris to perform for the Great Exposition of 1867. He brings his family with him to Paris. He decides to leave them in Paris to live so that his children can receive their education while he is touring. He supports them well while they are in Paris.
After Paris, Heller makes his return to London, this time at the Polygraphic Hall on January 27, 1868. He added Haidee Heller to the bill. She will remain his partner in the 'Second Sight' routine throughout the remainder of his career. It is said that she is his sister or half sister but some historians think there was no relation at all. The truth was any assistant that Heller used was referred to as some member of his family but they never were.

A funny little anecdote happened with Haidee and Mr. Heller. After his musical section of the show he and Haidee got into a quarrel behind the scenes. She refused to come out for the Second Sight routine. So Robert Heller walks out and announces "Ladies and Gentleman, this is the part of the program where Ms. Haidee Heller comes out, except tonight she refuses to do so. Let's wait and see." He then quietly takes a seat on the couch and begins to twirl his thumbs not speaking a word. A few moments later a red hot Haidee comes storming out. Heller says "Ah! I thought so" and they continue with the show.

Next he embarks on a tour of the world which includes Egypt, Australia, the Orient and much more, this continues until 1873. For the next three years he works mainly the British Isles.  In 1877 returns to the states this time with 49 tons of paraphernalia. At least this is what was reported in the New York Clipper newspaper. I wonder if that is even possible to travel with 49 tons of equipment? He leased the Globe Theatre in New York and again wins over the New York audiences this time with 'Heller's Wonder Theatre'. He played San Fransisco in the summer of 1877 and then goes back to England for a brief break. In September he is back in Boston and then in December he is back in New York for what would be is final New York appearance.
In May of 1878, Heller leaves New York for Europe. While in Europe he visits his family in Paris. His children hardly recognize their father who has been touring for many years. Whatever difficulties existed are patched up with his family. He decides that it's time to permanently reunite the family and start a new home in England. Once his next American tour is complete the plan was to bring the family together again, for good.