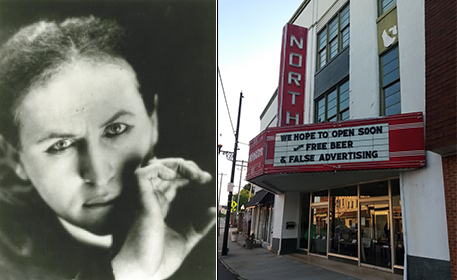 A few years ago, I was invited to speak at the First Houdini Festival in Danville Virginia. It was a small event but a lot of fun. I did a lecture on escapes and also another lecture on Houdini. There are some unique things about the organizer of this event. Wayne Alan is a professional magician, but he is also a huge Houdini buff. I believe it was the early 1980s, Wayne duplicated Houdini's Upside Down Straightjacket Escape in front of Keith's Vaudeville Theatre in Washington. But that wasn't all. He also picked up some items from inside the historic theatre before they tore it down.

Wayne has also been working on a Houdini book for years. He has some information that is very different from things I've heard in the past. I've been privy to a lot of the information and it's eye opening. The amazing thing, much of it comes directly from sources involved in the events of Houdini's life.

Now fast forward to 2021. Wayne Alan owns the Historic North Theatre in Danville VA. He is planning on holding the next Houdini Festival in Spring of next year. We spoke together at length about the way to do it, and I think Wayne has a clever solution. The Festival will be both Virtual and In-person. Of course, the in person events will be socially distanced (if we still are dealing with Covid at that time).  Below is Wayne's press release. Watch for more updates in the coming weeks.

Houdini Festival Scheduled for 2021
World Champion Illusionist Wayne Alan has announced that “The Houdini Festival" will be held at The Historic North Theatre in Danville, Virginia, on April 8-10, 2021 (April 6 was the date that Houdini celebrated as his birthday.). The Historic North Theatre is a beautifully restored 1947 vaudeville house with 500 seats and a full balcony owned and operated by Wayne Alan. Due to the pandemic the number of in-person attendees are still unknown. Even under the best scenario, there will be a limit of only 313 in-person attendees. Send an email to Wayne@WayneAlanMagic.com to be put on our mailing list for updates (put Houdini Festival in subject line). A new website will be up in November. A refundable $50.00 deposit for in-person attendees will give you priority seating. Reservations can be made by calling 434-793-SHOW (7469) or emailing Wayne@WayneAlanMagic.com
The goal is to bring together Houdini aficionados, magic collectors, escape artists and magicians. The Friday night show will feature Magic Castle award winners and the Saturday night show will showcase FISM winners. Plus, dealer displays, a viewing of a Houdini movie on the big screen, Houdini memorabilia display and other surprises. Close-up shows will be held in the Balcony Mini-Theatre with beautifully raked seating to provide for an amazing viewing experience. The first 113 in-person registrants will watch the close-up live while the others watch on the big screen in the main theatre. Because of its uniqueness we are hoping to receive national publicity, not only in the magic press but also in the mainstream media.
In Wayne Alan’s research for his upcoming Houdini book, he discovered that Houdini had an affinity for the number 13. Based on numerous cost factors and Houdini’s lucky 13, the rates for the convention will be $169.00 (13x13) for online and $213.00 in person. Individual tickets for certain (non-secret revealing) sessions and shows will be available to the general public. Reservations can be made by calling 434-793-SHOW (7469) or emailing Wayne@WayneAlanMagic.com
Posted by Carnegie