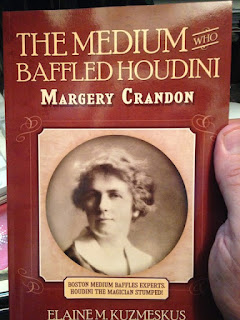 After finishing the book The Witch of Lime Street by David Jaher, I wanted to read more about Margery. I quickly found another book called The Medium Who Baffled Houdini by Elaine Kuzmeskus, and ordered it! I was unaware when I ordered the book that Ms. Kuzmeskus was a medium herself, so this book was likely to have a unique bias that the other book did not.

I suppose this 'other opinion' is what made reading this book so interesting to me. We, as magicians, all take the Houdini account as gospel. Yep, Margery's fake, Houdini said so, she's fake. Yet there are a number of books that give a different account. Do I believe those different accounts? Not really, but I'm willing to hear what they have to say. And I'll add this, I now want to check out some of the other source material that the author used to write her book. She references the Bill Kalush/Larry Sloman Houdini book on occasion. That source is easy to check as I have several copies and the notes to the book. But I do not have the book Margery the Medium by J. Malcolm Bird which is mentioned a lot in the end notes of this book. Knowing what I know of Bird, I'll take what he writes with a grain of salt, still I'd like to find out what's in there.

Chapter 1 had me worried pretty quickly when she stated that Margery was the reason that Houdini and Conan Doyle were no longer friends. It's safe to say 'spiritualism' is what ended their friendship but their friendship was already on the rocks long before she got in the picture. Margery just made things worse for the two former friends.

The first several chapters do a good job of letting the reader know who Mina Crandon was prior to becoming Margery. And despite his name being in the title of the book, Houdini doesn't really show up until around Chapter 9. I'm sad to say that one of the unfortunate stories, which I don't believe to be true, finds it's way into this book as well. That would be the story of the ruler being hidden inside the Margery Box and years later Jim Collins apparently saying 'the boss told me to put it in there'. Again, I don't believe that. But this 'claim' comes from William Gresham and his book Houdini The Man Who Walked Through Walls.

One surprise I discovered in the book are the references to Anna Eva Fay and the assumption that she started her career as an actual medium, despite the fact that she admitted to Houdini that she was a fake. In addition, Houdini claimed that Fay told him all her secrets, but maybe that is not the case. Barry Wiley, the author of The Indescribable Phenomenon, the biography on Anna Eva Fay, says that is 'fantasy'.  This is an area I must research more. Fortunately, the book on Anna Eva Fay is still available and it's on my list of books to get.

I will say this, if the accounts discussed in this book are even half true, then Margery didn't really get going until after Houdini had died. She, via Walter, presented some very unusual spirit manifestations. Some of them sound like they came right out of a magic catalog, and others are almost too fantastic to believe. There was one that she did on multiple occasions where someone would bring wooden rings, of different types of wood (different colors). And Walter would link them. Some sitters claimed they could see a gap forming in the rings and then sealing up. The ring test was sent off to a researcher for verification unfortunately, the rings were damaged. Thanks Postal Service!

One of the more unusual effects is Margery's trance state in which she could be heard to snore, yet her Spirit Guide Walter, could be plainly heard and understood. Is this just someones imagination running wild or was this really the case? Oh, and the levitation of tables and other objects. Again, sounds like a magic trick, but it takes on a whole new dimension in the seance room.

One big drawback in this book are the number of grammatical errors and spelling errors. There are a lot of errors. There are also some mistakes with dates, for example Houdini's mothers death is listed as July 17, 1914, not 1913. But overall the Houdini information is good, with just a couple exceptions.

A final interesting fact about the author, Elaine Kuzmeskus, was actually hired to be the medium for one of the Official Houdini Seances held at the Goodspeed Opera House in Haddam, CT. I'm guessing there was no word from Harry, again.

Overall, I enjoyed the book. It is clearly pro-Spiritualism, however the author includes many examples of fakery and spirit fraud, even with Margery. I believe my next book will actually be the booklet below. I need to get Houdini's take on this whole affair and compare it with accounts in this book and The Witch of Lime Street! 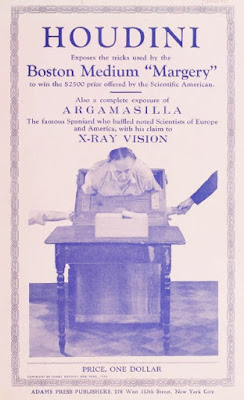