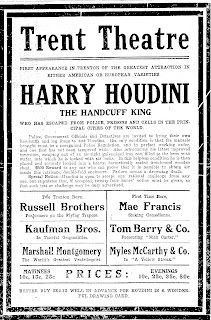 On February 11, 1912, the Trenton Evening Times Newspaper  announced the coming arrival of Harry Houdini to the NJ Capital. Houdini had toured the world and become the most famous Vaudeville act in history, but he had never performed in Trenton so the excitement was pretty high. In fact, there were a number of articles in the paper before his arrival that went on and on about his fame and popularity. Trenton was excited to have Houdini and the theatre owner was expecting box office gold. Notice what is written on the advertisement above, "Better Buy Seats Well In Advance For Houdini Is A Wonderful Drawing Card."

He would be presenting an interesting version of his Milk Can Escape, along with accepting daily challenges. At the Trent Theatre, Houdini's Double Fold Death Defying Mystery was the feature routine. Houdini would be handcuffed, placed into a large galvanized metal can filled with water, which then would be sealed with a lid and six padlocks. Next, the Milk Can with Houdini inside was placed into a wooden crate and locked up as well. This is the earliest newspaper account I've seen that mentions the Double Fold Death Defying Mystery. He opened at the Trent Theatre on February 19th, 1912 and the headline in the next days paper read "HOUDINI STARTLES TRENT AUDIENCES".

On February 20th, Houdini accepted his first challenge from the Castanea Dairy Company 234 North Broad Street Trenton NJ. The challenge was to escape from his Milk Can while it was filled with 80 gallons of real milk! Oh, and they stipulated that they wanted to use their own locks on the Milk Can. Houdini accepted the challenge and was successful in his escape.

February 22nd, Houdini accepted his next challenge which was to have Sergeant George T. Smith, the commander of the U.S. Army recruiting station, handcuff him spread eagle to the floor of the Trent Theatre Stage and then the cuffs would be nailed into the wooden stage floor. Winner of the challenge, Houdini.

The next challenge was announced on February 20th, but was to be carried out on the 23rd. This challenge is one to pay attention to. It was made by the employees of the Goldberg's Department Store.


Their challenge: to construct a large packing box which will encase Houdini. Then they will nail the lid shut and tie it securely with ropes. There is an interesting stipulation to the challenge which reads "We will send the box on for examination, but demand the right to re-nail each and every board before you enter, to prevent any preparation on your part."

This escape was to be presented on Houdini's final night in Trenton. There is no mention of Houdini in the February 24th newspaper. So did he escape?  Read on, as this is where things get interesting. The February 25th edition of the Trenton Evening Times carried this headline "HOUDINI COMING BACK TO ACCEPT CHALLENGES-Has Been Re-engaged to Appear at Trent During Week of March 11th". Reading the article further reveals that Houdini had been accused of being a fake and that the trunk built by the Goldberg's Department Store was made to Houdini's specifications so that he could escape and the entire thing was nothing more than an advertising scheme. The article says Houdini was livid over the accusation and made arrangements with theatre management to return.

To follow the timeline of the events this is how it played out. The morning of Feb. 23rd, a local paper informed Houdini that they had been notified by 'someone' that the Goldberg stunt was a fake. Even though the Goldberg challenge had not even taken place yet, it was planned for that evening. Houdini makes arrangements with the theatre management right then for a return engagement.  That night, Houdini in front of the audience read this letter to the audience before attempting the Goldberg Challenge. The complaint letter went on to challenge Houdini to escape from a crate built in front of the audience. Houdini agreed to submit to the test on Sunday morning on certain conditions. It turns out this new challenge was from the Armstrong Packing Case Factory, and they declined the additional conditions put on by Houdini. However, Houdini said their challenge would be the first he would accept upon his return on March 11th. I must assume the complaint letter then was also from the Armstrong Packing Case Company, though the newspaper does not name them specifically.

Following that drama Houdini did go through with the challenge from the Goldberg Department Store crate, but not before they re-nailed every single board. Houdini, again escaped. The final line in the Feb 25th article is interesting, "Mr. Houdini's engagement at the Trent during the past week stirred up more local interest than any theatrical attraction the Trent has had in years and there is no doubt that when he returns to the Trent two weeks hence, he will play to record-breaking business." Ya-think?!

Several days later on March 3rd, the employees at Goldbergs who were involved in the packing case challenge sent a letter to the Trenton Evening News asserting that they were not in on some grand advertising scheme and that Houdini only provided the dimensions of the box and nothing more. So his escape was legitimate.
On March 11th, Houdini did return to Trenton and he did accept the challenge from the Armstrong Packing Case Company. Their wooden crate was built on-stage in front of the audience. Houdini escaped. The newspaper reported "When he finally emerged from the box, there were thunderous cheers, and a more mystified audience has never departed a theatre."

The morning of March 12th, Houdini opted to try his hand at escaping from the First Precinct Jail.

Houdini was stripped of his clothing and was secured with two pair of handcuffs behind his back provided by the Chief of Police John J. Cleary. He was then placed into cell #4. It took Houdini seven minutes to free himself from the cuffs and the cell but he added a special twist. He exited discreetly through the rear jail door and came back through the front door to surprise the crowd of 500 officers and by standers that were waiting to see if Houdini could escape!

That evening, Houdini accepted a challenge from three sailors to allow them to tie him to a post. The sailors did in fact tie him securely to the post and a committee of audience members that was on hand agreed that the escape artist was bound tightly and faced an impossible task. Eighteen minutes later he was free!


Houdini was scheduled to do a bridge jump while handcuffed from the bridge over the canal lock on East State Street on the morning of March 13th. However, the stunt was cancelled due to 'unfavorable conditions' and was to be rescheduled if they could find a better location. It doesn't appear on this trip that he found such a place. But that small setback did not stop Houdini. That evening he accepted a challenge from the A.V. Mannings Sons employees to escape from a sack that they provided. The sack was tied at both ends and yet the master mystifier freed himself.

He added his Needle Swallowing routine to his regular act during the week. The Needle routine involved swallowing twenty four sewing needles, followed by several yards of thread. After verifying that he had swallowed both the thread and needles, he would cough them back up but this time the needles would be threaded! A small effect, but Houdini would create a huge sensation with it.

The challenge on the evening of the 14th involved being secured in a full body padded cell suit. The Trenton Times newspaper says "This restraint encloses the prisoner from the neck down to including the feet, and is held in position with broad belting straps and fitted with steel buckles". He was placed into the restraint by three of asylum attendants. Results, Houdini 1, asylum attendants 0, though not without a great deal of struggle. He earned his freedom on this evening.

The final night was March 15th, and the last challenge of the week. This time it involved being strapped to an iron hospital bed provided by the W.C. Emmans Company. He made the escape attempt  in full view of the audience. There is no record of what transpired on this night, though we can assume he defeated this challenge like he had all the others. On March 17th, there was an interesting notice in the ad for the Trent Theatre. They make mention that there is 'No Houdini This Week'. The ad goes on to say that Houdini came close to breaking the box office records and they were thrilled to have hosted his second appearance in the New Jersey capital.

In May 1912, Houdini's brother Hardeen was scheduled to play the State Theatre in Trenton but had to cancel due to an injury he received in Reading PA. Later in June 1912, Hardeen did go to Trenton to play a week at the Taylor Opera House. He received great reviews.

Houdini only performed live in Trenton NJ in 1912. His next appearance in Trenton wasn't until 1918 in the form of one of his movies, The Mastery Mystery.

All of this information was gathered through articles and ads that appeared in the Trenton Evening Times Newspaper. There were other papers in the town during this time period, but I was unable to access them to add additional information. No photos of Houdini appeared in the newspaper, except for the one in the advertisement on March 10th. Still it's wonderful to have the historical record of what played out day by day. One hundred years later, we know that Houdini orchestrated many of these challenges during his career. It's fascinating to see how he used them to cause controversy and pick up another week with almost guaranteed crowds. Where other Vaudeville performers were doing the same act show after show, Houdini gave them a new thrill each time they came to the theatre. It's no wonder he was a hit wherever he went.
Posted by Carnegie

Email ThisBlogThis!Share to TwitterShare to FacebookShare to Pinterest
Labels: Houdini, Milk Can, Trenton