I just returned from an emotional and very rewarding trip to Beverly Mass. The trip was really to say goodbye to Cesareo and to support my friends at the LeGrand David Show, the show which he created.  I had missed the funeral, but I felt it important to visit the grave site. My friend is in peace now, no longer suffering the effects of illnesses and ailments. And as David so eloquently said during the show on Sunday, Cesareo is now busy building a show for the heavenly hosts.

We went to dinner with David on Saturday evening and it was a very enjoyable night. On Sunday we went to see the first performance of LGD since the hiatus that was instituted by Cesareo following their 35th Anniversary performance. This show is one of the last for the 35th year of consecutive shows. The big question is will the show continue??? No one knows for sure, that is for the members of the company to decide. David now fills the shoes left behind by Cesareo. Though no one could really fill Cesareo's shoes, David has been groomed his entire adult life by Cesareo and I know the future is in excellent hands.

I must say that the version of the show we watched on Sunday was magnificent. It was different from what I had seen numerous times before and I was filled with joy over the changes and additions to the show. You get to hear Cesareo's voice in the show which is a treat. And there is more dialog in the show than in past versions which I really enjoyed. David's routine with a Toucan is a real treat. I don't want to give away any of the surprises, but I will say if you've never seen the show, there are still several more performances left of the 35th Season. It would be a very good idea to go see the show NOW as this version might never be presented again and believe me, it's wonderful!

Visit their website at www.LeGrandDavid.com for more information on showtimes. 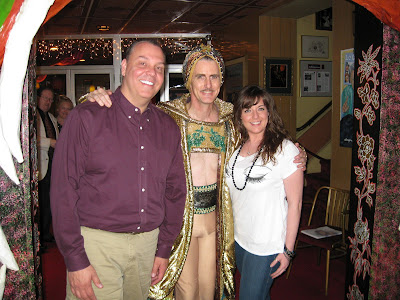 For me, this visit was about saying goodbye to my dear friend Cesareo. But it was also about continuing to build the friendships with the members of the company. We only got to spend a few short moments with Mark and sadly an even shorter time with my friend Rick. I was glad to talk a little with Ann but we also didn't get to enjoy Avrom's company but for a few brief seconds. So next time, we will be sure to see more of them!

The future is going to be different for all of us but I predict it will be an exciting future! I cannot wait to see what they do next year and in the years to come. We will be back in Beverly later in the year and hope to spend more time with our friends and enjoy the next chapter in this exciting adventure!

The last article in this tribute http://deancarnegie.blogspot.com/2012/04/lgd-marco-magi-lives-on.html
Posted by Carnegie