If you spend some time looking over my blog, it becomes apparent fairly quickly who my favorite performers are. You'll see the most articles on this blog are about HOUDINI with over 170 articles. Next is Harry Kellar with 32, Le Grand David with 27 and they will soon pass by Kellar. And then the next one is Robert Heller. I've actually probably spent more time in hard research over Heller than anyone. He is such an intriguing character in the history of magic.

Occasionally, Robert Heller items show up on ebay and this time we've got something really cool. It's a unused ticket from Heller's performance at Horticultural Hall, October 13, 1877. I know he was in Boston in September of 1877, so I'm going to assume this ticket is from the Boston Horticultural Hall.
If you are interested in bidding on it, it comes with a pretty steep starting price of $475.00. Too rich for my blood. The auction is here http://www.ebay.com/itm/Hellers-Wonder-ticket-Magic-Spiritualism-Spiritualists-Occult-History-Rare-/281283020755

Next up is a really cool picture of a Heller Poster from the Harry Ransom Collection. I don't recall seeing this poster before, and if I have, I have never seen it in color. It's a beautiful piece. An interesting piece on the poster, underneath his name it reads "From the United States". This is funny because Heller was actually from England. To add to that, when he first came to the U.S. he pretended to be from France! 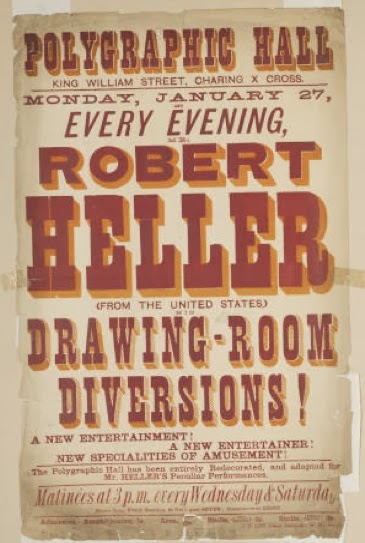