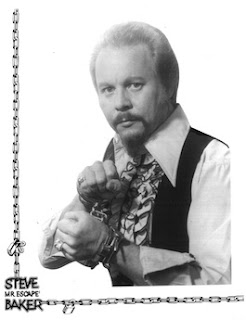 I spoke with a friend of mine today, Steve Baker, known professionally as Mr. Escape. Steve is in his 70s now and not in the best health. He has had a number of serious health scares and was in a rehab/nursing home for quite a while. Though he is home now, I can tell he's not the same. As we spoke today he went on and on about how puzzled he is that no one contacts him. I mentioned the fact that maybe it had something to do with the fact that he doesn't give out his phone number, he no longer has email and no one has his address. His response, "I have email". So I followed that up with, "really, for three years you've been telling me that you needed to get your computer working again. So you've got it working now?". He replied "yes." So I sent him an email after we got off the phone and it bounced back, exactly as I expected it would. I get the impression that in his mind he thinks it's several years ago. I know for a while he was having a serious issue with short term memory, but they've amazingly got that resolved.

He is surely a controversial figure. He's probably pissed off more people in the magic world than I've even met! And yet, he can count some very big names as good friends. He's always had a combative nature to him which is unfortunate because the 'everyday Steve' is a pretty nice fellow. But I also am aware of the honory side of Steve that probably did more to get him in trouble than help him. I can't tell you how many fires I've tried to put out where he was concerned, sometimes it worked, often times it didn't. But escape artists by nature are complex people and then again, aren't we all.

Below is a video from last year of Steve while he was in the Nursing Home. An effort was made to bring back his belongings from his California storage unit. For the record, everything was brought back through the efforts of Theresa Greenwood and some friends of hers. At any rate you can see Steve as he looked then. I believe he is doing a little better now, though his memory is spotty sometimes.