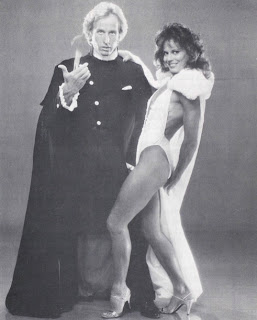 Once upon time...There were two wizards who captivated the world. Their magic spell astounded young and old alike. With magic that was ancient and new all at the same time they grew in fame and fortune. Then tragedy struck and it was all gone. They were the Pendragons.

Jonathan and Charlotte Pendragon ruled over Grand Illusion for thirty some odd years. Jonathan is even credited with reviving the term 'Grand Illusion'. When I was just learning my craft they were already established. They were the first couple of magic. There was no one out there like them. Everyone, and I mean everyone, from amateur to professionals wanted their magic.  Teenagers would fight and argue over how to do the Pendragon Sub Trunk as fast as they did. David Copperfield, asked and eventually got permission to use Jonathan's handling of the cloth during the sub trunk exchange.

I only met them once. It was at a convention in Washington D.C.. I had tried to hire them to do a lecture after the convention, but the price their manager was asking was far more than our little club could handle. But I did still meet them, and helped them unload their props. Unfortunately, it wasn't long before I was pushed aside by the crowd of fans and fellow magi and that was the end of my meeting with them.

I learned a lot about illusion magic from Jonathan. His writings that appeared in Genii Magazine were some of the most brilliant things I had ever read. Every time a Pendragon issue would come out, I would devour it, and read it over and over. Jonathan was an illusion magic genius. His thoughts and philosophies on magic were so profound to me. Sadly, his act was fodder for lesser performers who would steal his creations, techniques and even complete routines without any acknowledgement of their creator.

The Pendragons idea for an act began with three tired old illusions: The Sub-Trunk, The Sword Basket, and the Broom Suspension. The sub-trunk dates back to Houdini and the trunk trick itself dates back to Maskelyne, though not with substitution effect that Houdini added. The suspension was the creation of Robert-Houdin and the sword basket, I'm not sure of it's origins. But by the time that Jonathan and Charlotte got hold of them, they were worn out old tricks. The idea of building an act on those three things was crazy.

So what did they do? They built an act on those three things! They added touches to each routine, changes and alterations to take them from standard tricks to something different. Because of the athletic abilities they both shared, they were able to add elements into the routines that no act before had ever considered let alone tried. The end result was a spectacular act and what really amounts to an education in stage magic on how to approach your art.

They had plenty of historical moments. Probably the one that is brought up the most is the In Search of Houdini Special. This was hosted by William Shatner and featured a lot of guest performers. The Pendragons were on to do a recreation of Houdini's Subtrunk, using the original trunk I think, or at least one like Houdini's (steamer trunk). They went through the routine as Harry and Bess would have in around 4 seconds. Then, they repeated the trick, this time with their own trunk and their modern presentation. With lightning speed, Charlotte seemed to turn into Jonathan! Then Jonathan opened the trunk and as Charlotte began to stand up, she stopped and inched back down. On LIVE TV she had a costume malfunction, and was unable to get out of the box. It was funny for all watching and probably a little embarrassing for the Pendragons. It was certainly not something that stopped them or slowed them down. They handled the situation gracefully and professionally. I'm not sure anyone would have known had it not been for William Shatner pointing it out.

Over the years, they introduced illusion after illusion with interesting twists or presentations. On TV in England they debuted a Jim Steinmeyer illusion called 'Permeability', which they called INTERLUDE. Everyone and their brother soon got one and copied their presentation. They performed a Cage Production Illusion with fire and soon everyone was doing it. They introduced on a Disney Magic TV Special a clever 360 Degree Levitation and later they came out with a Sawing in Half Illusion that had clear plexiglass boxes to contain Charlotte. They called it 'Clearly Impossible'. And that was getting ripped off. Clever illusionists and illusion creators are no strangers to theft. It's been happening for 100 years but it's still wrong.

All that is gone now. The Pendragons faced some personal issues, some of which were covered in the press and much of which was not. I've got no comment, it's their business and no one else's. They have gone their separate ways. The Pendragons are no more. Charlotte has created an act of her own, which I think is a mix of illusion magic and stage magic. I've not seen it so I don't know exactly what is in her act. But I wish the very best for her and hope she meets with huge success.

Jonathan is still doing magic, though not the physical kind anymore. His act is more cerebral and shows a different side of his character. But from what I hear, Jonathan is slowly getting pulled back into illusions. So perhaps, we'll yet see a new type of Pendragon Grand Illusion grace the stages of the world that we can be inspired by. And hopefully, the magic world will look at him and learn that even with the greatest obstacles in front of you, it's possible to overcome and come out better and brighter.

Finally, watch this video of the Pendragons at the height of their career. They were incredible!